Draft Minutes of the meeting held on Wednesday October 12th 2022 at 7.30pm in the Willoughby Gallery, Corby Glen.

Milestone: Cllr Robins commented on the proposed re-painting of the milestone.

Village Pump: This was damaged recently when a van reversed into it and needs re-cementing in. The police were informed at the time & barriers erected for protection during Sheep Fair. It is unclear whether the van registration was taken and / or the driver identified. It is believed that the structure is not in a dangerous condition, and the barriers will be removed on Friday.

The pump stands on LCC Highways land; Cllr Walsingham will contact Rowan Smith to discuss options. Clerk to add to agenda for next meeting.

Musson’s Close Land: No longer an issue. It will not be returned to SKDC but will be held in trust for the residents and is available for all to use. It is hoped to erect a bench there in memory of Sam Smith.

Access over The Green: The owner of the property requesting access explained the situation, and outlined precedents and alternatives. Permission for temporary access had been granted in the and no objections had been received. Temporary access is required for the removal of 50-60 trees and to remove 16-18 loads of soil. No vehicles will be parked on The Green. The surface will be made good afterwards. The resident wished to make a start as soon as possible before the ground becomes waterlogged, and the expected duration is around 4 weeks.

Allison Homes Open Day (20th Oct): Cllrs Lamming, Walsingham & Fowler wish to attend. Clerk to inform Allison Homes. Cllr Robins reminded them that if they wish to visit the site, then PPE will be needed.

2.     District and County Councillors’ Reports:  To be emailed to the Clerk for circulation.

3.     The minutes of the meeting of the Council held on Tuesday September 27th 2022. The minutes were approved unanimously after correction of the date of the next meeting.

4.     Councillors’ Declarations of Interest: None.

75/20 Superfast Broadband: The funding is now secure. Surveying has already started. Cllr Cook thanked all for their efforts in getting this through. Cllr Clink proposed a vote of thanks to Cllr Cook for his efforts and persistence. The council would also like to thank Corby Glen resident Marcus Sanderson for instigating our bid for government funding toward Superfast Broadband and his work throughout the process

Phone Box: NISA transferred a donation to the Parish Council account on Oct 5th as a contribution to the renovation of the phone box area. (To be verified when on-line access to the bank account is restored.) The cost of a bench with planters is £450 ex VAT including delivery.
Liz Partridge has been requested to turn her sketches for the decals into formal drawings. The cost of printing on vinyl (40cm x 60cm) will be £59 each for 2.
Attempts to contact the resident in connection with the broken glass have been unsuccessful. Clerk to write to the resident.

Benches: Cllr Lamming has offered to pay for a bench to replace the broken one at the bottom of St John’s Drive; Cllr Harwood & a resident have also offered to pay for benches. (Total 3 benches). All benches to be of composite material (NOT wood). Estimated cost £290 – £315 + VAT.

29/22 EV Charging in Corby Glen: Cllr Silabon circulated a report of options and showed an illustration demonstrating that the machines can be relatively unobtrusive. Cllr Fowler and others were concerned that they would distract from the appearance of our village with its large number of Grade II listed buildings. The ideal place would be the Market Place, as the council has already considered an electricity supply to this area. An alternative might be behind the Methodist Chapel. LCC & SKDC are to be consulted to gain an understanding of their plans and views.
A Working Party is to be set up to investigate further and report back.

09/16 Neighbourhood Planning: The team has provided 3 documents which have been circulated to councillors electronically.They are largely unchanged from the draft reviewed previously with minor amendments following discussions with SKDC. Cllrs need to read the documents as they will be requested to approve them at the next meeting. Any concerns should be raised before the end of October. Cllr Clink will check the timetable to ensure that approval at the November meeting does not place it in jeopardy. Clerk to email to Cllrs Andrew, Harwood & Silabon. Cllr Clink to provide a hard copy to Cllr Evans for circulation.

Matters to be resolved:

46/22 Access across Village Green: Cllr Lamming had only received certain key documents since the last meeting.
A document dated 1981 appears to prove conclusively that Corby Glen Parish Council is the legal owner of The Green, so theoretically could give permission for access. However, Cllr Cook had investigated the relevant legislation. 3 acts of parliament outline conditions for the use of village greens, one of which states “The owner of the green may only drive, or permit other people to drive, on the green if it won’t 1) Harm the green in any way and 2) Interrupt the public’s enjoyment”. Doing so amounts to a criminal offence. If the council permitted this there is a concern that the council would be seen to have condoned the same
Ideally, legal advice would be sought, but experience shows that this can be prohibitively expensive and is not always conclusive.
The matter is further complicated by the granted planning application which states that construction traffic could cross the Green with consent from the landowners.
The council debated the pragmatic approach of permitting access in order to minimise disruption and safety issues to an already congested village centre by construction vehicles using Laxton’s Lane, as opposed to the legality of the alternative approach across The Green.

The following motion was debated: If found to be legally viable, the council approves in principle granting temporary access across The Green for the purpose of building in accordance with approved planning permission.
At Cllr Fowler’s request, a recorded vote was taken. For: Cllrs Cook, Silabon, Clink & Andrew; Against: Cllrs Fowler, Harwood & Walsingham; Abstentions: Cllrs Lamming & Evans.

Cllr Clink will draft an email to the Open Spaces Society seeking clarification of the council’s legal position; the clerk will seek advice in the same manner from LALC.

It was stressed that if access is granted, the council will require, in writing, the timeframe, duration and nature of access; and a guarantee that trees / tree roots will not be damaged, and the surface of The Green returned to the state it was in prior to commencement of the work.

An EGM is to be arranged to discuss further once Open Space & LALC have provided advice. Other items which time did not allow to be discussed at this meeting to be included.

47/22 Armistice Day arrangements (leaf clearing / PA system etc): Cllr Walsingham has requested the loan of his PA equipment from Mr Lynch (the Parish Council should consider purchasing their own for the future). Contact needs to be made with the resident of The Green who has previously kindly allowed the use of their electricity. Cllr Lamming has spoken to Mr Adcock re leaf clearing – Clerk to confirm by email. Cllr Robins agreed to arrange for the road sweeper immediately beforehand. It was agreed unanimously that the clerk will purchase a wreath (up to £20), having checked that none has already been purchased on the council’s behalf.

48/22 Christmas arrangements: Cllr Cook outlined the risk mitigations regarding the erection of the Christmas Tree. Mr Kiely, Cllrs Walsingham & Cook to source a suitable tree. With the Christmas Tree Fund now back in operation, it is believed that Christmas Eve is covered.

S22/0731 Allison Homes S22/1574 re footpath / S22/1727 Submission of detail: Controversy surrounded the provision of a footpath on the North side of the A151 providing access to the village centre. It has eventually been agreed that a narrower footpath will be provided by the developer, but he claims to be unable to complete this before occupation of the first dwelling because of lead times of traffic regulation orders etc. He has therefore applied to have the condition extended such that the footpath is not required to be completed until 12 dwellings are occupied. The council voted to accept this extension (8 for, 1 against).

S21/1841 David Wilson Homes Development (199 dwellings): SKDC had queried the list of road names agreed at the last council meeting, preferring sheep breeds. The council took exception to the tone of the email. Cllr Robins has been in communication about the matter. Once the response to this communication has been received, Cllr Walsingham to contact SKDC on the Council’s behalf re-iterating their choice of names.

S22/1809 Bourne Road – extension of 30 mph speed limit Allison Homes: Ultimately the 30mph will be moved to the Bourne side of the access to the DWH development, but for the time being a temporary sign has been erected the Bourne side of the Allison Homes development. (This is insecure – clerk to contact Rowan Smith).
The council has no objections to the 30mph limit on the A151 being moved.
The clerk explained that Swinstead Road had incorrectly been excluded from the application because of the belief that access to both developments is within the current 30mph limit. Whereas this is true for Allison Homes, the DWH development access road is outside the zone. The proposal is therefore being re-worked.

36/22 Report of annual playground inspection: Clarification had been sought as to the work carried out to the swing uprights by Miracle for which they are making a charge. This consisted in applying wood preservative. The Council is disappointed that this was carried out without consideration of the parlous state of the uprights – reported rotten in RoSPA report. It was reluctantly accepted that in this instance the bill should be paid – but a lesson learnt.

07/21 Playground Equipment Maintenance: Cllr Fowler has the missing upright from the toddler tower but no fixings. There is a hole in one of the seats of the horse.

9.     Matters to be further discussed at this meeting:

05/22 Reason for new footbridge (rear of St John’s Drive): To remain on the agenda until Cllr Hill available.

19/22 Use of S106 funds from DWH development / residents’ consultation: deferred

30/22 Cut around base of lime tree on Village Green. Done but re-grown. Add to next grass cutting contract.

38/22 State of the hedge and sycamore bordering the Green / primary school playing field: Not discussed

40/22 Consider a plaque for Bailey Drew on the defib: The Clerk provided a draft of a possible stainless-steel plaque. Preferred wording was discussed. No contact details for the owner of the Methodist Chapel were available. Clerk to contact Bailey’s parents and agree wording etc.

42/22 Consider repainting the milestone on the Bourne Road: Not discussed

43/22 Three lights not working between Barleycroft Road and Pridmore: Not discussed

The next regular meeting will take place at 7.30pm on Wednesday November 9th 2022 at the Willoughby Gallery. 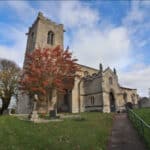 Previous:
St John’s Church has been open for over 850 years
Next:
Passageway Lighting between Barleycroft & Pridmore Road